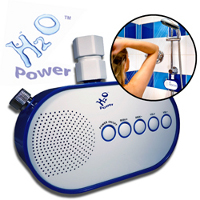 After shower speakers became popular, here now is a device that ought to be a gift to those who have family members that love singing in the shower, although they would never have made it past the audition stage of American Idol. We’re looking at the Water Powered Shower Radio, and as the name suggests, you need not burden your monthly power bill with this, and the other advantage would be to have its audio content drown out the voice of the one singing.

This is one radio that’s going to make waves in bathrooms across the country, and will ship only at the end of March for £34.95. Now, if only someone could figure out a similar principle and have vehicles run on water instead of gas.

Using the Water Powered Shower Radio is a snap, and installation does not require a rocket science degree. All you need to do is fit the radio in line with your shower hose, where water that flows through will power the H2O micro turbine that in turn drives a generator which produces energy.