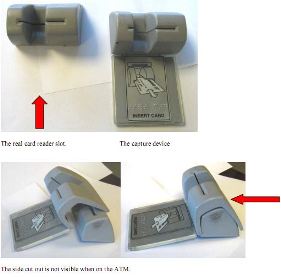 I never heard of an ATM Skimmer before today, but now that I have, I am scared. It reminds me of the time when I heard about the identity thieves that supposedly dig in your garbage to get your personal information. I’ve been shredding my bills ever since.

The ATM Skimmer is most certainly a cool gadget, unless you are a victim of it. As you can see by the illustration, it is a slot that is designed to fit over an ordinary ATM card reader of your typical ATM.

This particualr one was found on a Citibank ATM in Woodland Hills, California. When a customer went to withdraw some cash, little did he or she know that his or her card was scanned by a thief. The Skimmer also had a tiny camera to record the user as he or she entered his or her PIN number. I would imagine that the thief probably planned to have retrieved the Skimmer, and started printing phony ATM cards. Then the scoundrel would have gone and made some seriously illegal withdrawals.

Of course, this thief would not be making “easy money”. This card reader is a pretty complex device, even though it could have been made from parts from an ordinary MP3 Player.

I suppose that the lesson to be learned is to watch out before you use the ATM. I wonder if I would have spotted the ATM Skimmer. You had better believe that I will be looking close next time.