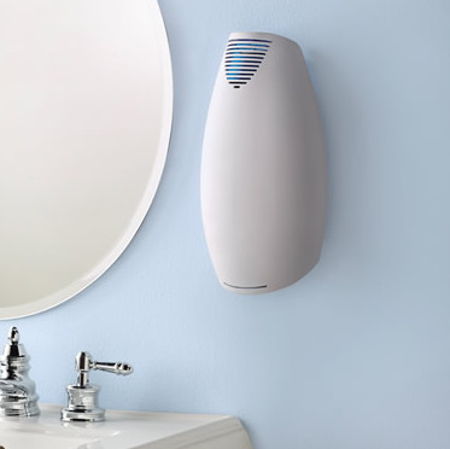 I have read many times that one ought to cover one’s toothbrush when done, and there are many reasons to do so – where chief of two of them would be this: to prevent nasty insects like roaches to crawl all over them at night when you sleep, and the other would be to make sure that each time you flush, the unseen bits of water from the toilet bowl might just end up landing on the bristles of your toothbrush. Definitely an icky situation, either one of them, although the latter certainly won’t happen if you are well off enough to have a bathroom that is large. Having said that, why not make sure the entire bathroom itself would smell great with the $159.95 Wall Mounted Germ Eliminating Air Purifier?

As its name suggests, this is an air purifier that claims to be able to eliminate up to 99.9% of airborne bacteria, and it will also do away with the likes of mold, viruses, pet dander, dust mite allergens, and pollen – all without having to take up additional space on the floor like a traditional air purifier. All that you need to do is to mount it to a nearby wall, and it measures all of just 3.5” deep, making it protrude less than a typical sconce or picture frame. It will make use of convection to draw in airborne impurities and an internal ceramic heating element would then get rid of bacteria, fungi, viruses, and pollen, as a result returning clean air to a room without having to rely on nasty chemicals. Not only that, there are no fans or filters to worry about, resulting in silent operation and minimal maintenance.