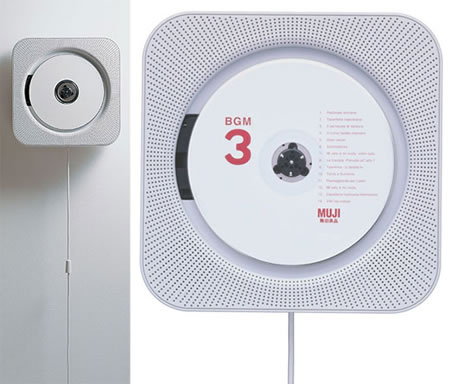 I feel confident in stating that a very large portion of the general public considers CDs to be an outdated technology.  So with that in mind, that’d make something like this, in which case the only function is to play CDs doubly outdated.  After all, although some of us still have a CD or two lying around, they could at the very least toss in an FM radio.  Instead though, they bank on that someone not willing to give up on their CD collection will be drawn in by the chic look of this CD player.

After all, this does look plenty chic, as far as looks go, I really can’t complain.  It mounts to a wall and plays your music through the speakers.  The volume and search controls are located at the very top of the CD player, which keeps the face of it nice and clean.  That is besides that it shows the CD, which would give you a way to proudly show off your favorite music.  Sadly though, this CD player gets even more ridiculous.  To purchase it, it’s going to cost you $178 from Muji.  I can’t see many being willing to pay that for a device that’s already plenty out of date.