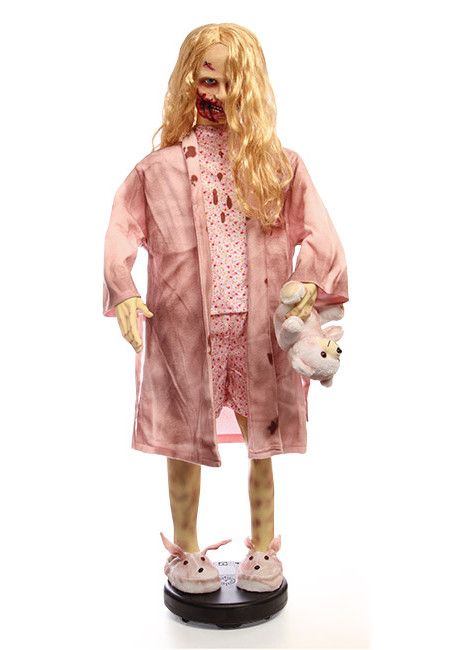 Since we are about to approach the end of October, that can only mean one thing – Halloween is well on its way, which means one ought to start making the relevant preparations in place, such as party favors, candy, and of course, presents for those whom you think deserve one. To set aside $199.99 for the Walking Dead Animated Teddy Bear Girl is a sign that you are an avid fan of the rather graphic comic series which has since seen a TV series (the fourth season is about to premier!) and a computer game to boot. This is an officially licensed Walking Dead memorabilia, and would definitely be an unforgettable addition to your Halloween collection as it comes in a life-size reproduction of a zombie girl.

To make things creepier, “she” is voice activated, pretty much in the same way that noise more or less attracts zombies in both the comic and TV series. Something about zombies do bug me, however, why can’t we wait until all of their teeth have rotted out, that they are unable to sink into our juicy flesh? Well, that is just one aspect of my doubt for this genre of undead, but then again, millions of Walking Dead fans cannot be wrong, and the awesome first time we saw Rick Grimes in the TV series get confronted by a girl wearing teddy bear slippers, and yet is deadly, is one that remains seared in my memory. Since she’s sound activated, it would be the ideal tool to have to scare trick or treaters who walk up your home. Powered by a quartet of AA batteries, she won’t rot – ever, and does not need to survive on human brains.