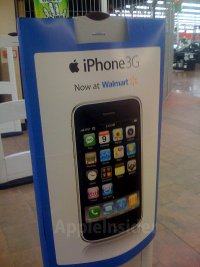 Most of us who shop at Wal-Mart tend to think that we are getting a better bargain there compared to elsewhere, which is true most of the time if you want to put up with sub-par service and even the risk of getting trampled to death due to insufficient security during mad rush days like Black Friday. Still, for folks who have yet to jump aboard the iPhone 3G bandwagon after more than half a year and want to do so, they can now head down to their local Wal-Mart from Sunday onwards, although you won’t find it to be much cheaper compared to those found in AT&T and Apple Stores. In fact, it will retail for $197 – a (sarcastically) whopping $2 discount over the standard $199 price point for the 8GB version while the 16GB model is going for $297. Does this mean you get more value out of a shorter contract? No – the phones are still attached to a new 2-year service agreement with AT&T or with a qualified upgrade.

It is quite a disappointment, really, to see prices that Wal-Mart have announced. They’re pretty much in line with iPhone 3G prices everywhere else, so forget about rumors of Wal-Mart selling them on the cheap. Some Apple bloggers did point out the possibility of a $99 iPhone 3G, but I guess that is no longer a possibility considering how tight fisted Steve Jobs can be when it comes to having full control over his company and its products. Those who are interested will be able to make a bee-line for Wal-Mart stores from this Sunday onwards, but bear in mind not all Wal-Marts will carry the iPhone 3G – only 2,493 of Wal-Mart’s 3,200 locations will have it, so do call them beforehand. Image courtesy of AppleInsider.