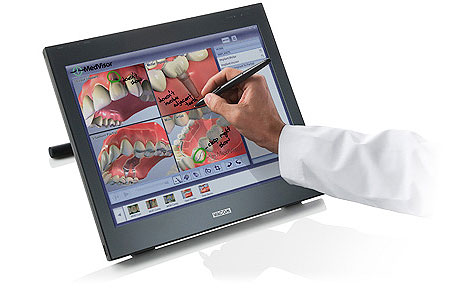 Mention the word Wacom and the first thing that comes to your mind would be tablets used by graphic artists worldwide, such is the strength of its brand name. While the company has been releasing a decent amount of tablets for the computer industry in the past, it has now moved forward to supply products which target other industries that rely heavily on computers as well. The DTF-521 Interactive Pen Display from Wacom (also known as the PL-521) shares some similarities with the company’s Cintiq line of tablet displays, but it will come with a lower level of precision at a price tag which is much friendlier to your pocket.

For those in the know, the Cintiq line of tablets are used by Photoshop artists who require extreme precision in their work, but for lesser mortals at the workplace will find the DTF-521 more than adequate for everyday use. In fact, the level of precision is above average and can even be used by the budding graphic artist. Industries that have traditionally seen little use of the computer will find the DTF-521 handy. Take for example, a dentist who can jot notes on-the-fly on a set of x-rays as shown above.

The DTF-521 features a 15″ LCD display that features a maximum resolution of 1,024 x 768 and can detect up to 512 different levels of pressure whenever a special pen is used. This amount is half that of a Cintiq tablet, but more than sufficient for everyday casual use. The DTF-521 is hooked up to both USB and a graphics card simultaneously, featuring even a VGA passthrough that can accommodate a secondary, duplicate display. Interested parties can pick up the Wacom DTF-521 for $1,624.