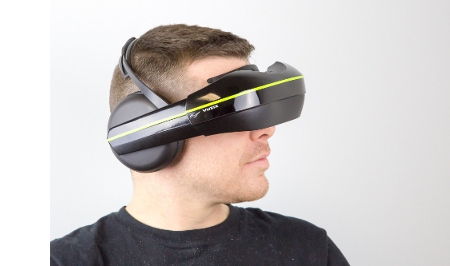 When it comes to Virtual Reality (VR) headsets, it certainly does look as though there is a future – and a rather bright one at that, too, as more and more hardware manufacturers jump on board. It must be said, however, that the technology and industry still has a long way to go before the gap between realism and virtual is bridged. Well, the spanking new Vuzix IWear 720 video headphones was showcased not too long ago, and it was also encouraging to hear that Vuzix has also partnered with the Open-Source Virtual Reality (OSVR) alliance, which happens to be a new standard in VR gaming that delivers not only hardware but software support for compatibility with Vuzix VR products.

It must be said that the Vuzix IWear 720 video headphones happens to be the most compatible VR and entertainment headset in the market at the moment, courtesy of supporting connectivity as well as content on just about any device that support HDMI outputs. This partnership with OSVR will be able to open up more doors while bringing an excellent ecosystem which standardizes interfaces between devices and adds VR support. In other words, avid gamers ought to look forward to the IWear 720 video headphones.

The Vuzix IWear 720 video headphones can be marketed as the ultimate mobile video entertainment and gaming system, as it will play nice with just about any device out there that supports HDMI output. Accompanied by integrated motion tracking, OSVR, Unity 3D, and Unreal gaming engine support, there is also a growing list of games as well as VR title support offered. It will boast of dual HD Displays and revolutionary nano optics, ensuring that one gets the equivalent experience of a 130″ home television from 10′, where one can play games, interact with apps, and watch 2D, 3D and 360 degree VR movies. It is also completely portable and battery driven, letting you enjoy it just about wherever you are. There is no word on pricing or availability of the Vuzix IWear 720 video headphones just yet though, so stay tuned.