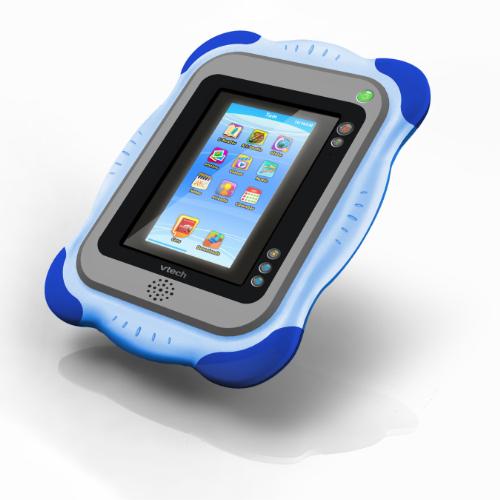 The tablet world has just gotten more competitive, what with the iPad 2 being imminent for a release later this year alongside plenty of other tablets that intend to challenge Apple’s dominance coming your way as well. Of course, what better way to introduce your little ones to tablets without having them break your new iPad than with a child-friendly model?
We’re talking about the VTech InnoPad, where this cutting-edge, multi-function tablet is capable of delivering interactive and animated reading, educational gaming and creative activities via a library of cartridges.

The InnoPad multi-media educational tablet will target little ones aged 4 to 9, where it will merge interactive and animated reading, learning games, creative activities and a rich collection of applications. Specifications include a 5″ brilliant color touchscreen LCD display, a tilt-sensor for game control, microphone, and connectivity options that include USB, an SD memory card slot and a headphone jack.
Since it intends to be child-friendly, expect the InnoPad to come housed in a sleek, kid-tough and compact design for easy portability. Stories that are read through the InnoPad, will be able to come to life via interactive, animated e-books which deliver story narration, character voices, animation, vivid graphics, sounds and music.
Learning games will also be made all the more engaging thanks to its touchscreen display and tilt-sensor, providing kids with hours of fun. With the InnoPad, they can control how they play, while developing the skills of using touch applications including tap, flick, pat and drag-and-drop – a precursor of sorts to a future tablet that they might just own down the road.
Among the full-feature cartridges that deliver interactive e-books, learning games and creative activities comprise of titles such as Disney/Pixar’s Cars 2, Disney Fairies, Disney Princess, Dora the Explorer, Mickey Mouse Clubhouse, The Penguins of Madagascar, Scooby-Doo, SpongeBob Squarepants, and Disney/Pixar’s Toy Story.
The InnoPad will retail for $79.99, while each piece of software is going for $24.99.
Press Release