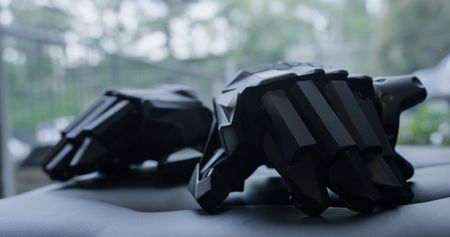 The world of virtual reality, or VR in short, is certainly one that is expanding quickly with many people jumping aboard the bandwagon. Even smartphones have become powerful enough to be able to handle their fair share of VR apps with the help of a VR attachment, of course. The next step in the VR world? To be able to “touch” items in there. Of course, the likes of taste and smell are still nigh impossible since we don’t even see those in regular games, so it would be a long time in coming before something like that happens in the VR world. Still, progress must be made, and the latest progress where VR is concerned arrives in the form of the VRgluv — whch is touted to be the first consumer-priced VR gloves in the world.

This haptic/force feedback gloves for VR is raising funds via a Kickstarter campaign in order to become reality. The VRgluv is said to be compatible with the popular Vive and Oculus virtual reality headsets, enabling users to be able to touch, feel, grasp and interact with objects in virtual reality.

According to Chris Taylor, CEO, of VRgluv, “Our Patent Pending technology will have applications in several industries including gaming, education, medical and robotics. Additionally, as an avid and early-adopter of VR gaming, myself, I am thrilled that VRgluv is very focused on initially introducing our gloves to the gaming community. I believe that giving gamers the ability to use ‘virtual hands’ instead of button controllers is literally a game changer. Finally, VR hardware is nothing without great content, and, we are already working with talented developers to create a suite of games that will make for an absolutely incredible variety of gaming experiences from the very first day that our Kickstarter backers receive their gloves.”

The gaming landscape would certainly be a far richer one with the arrival of the VRgluv, but it remains to be seen whether it will be realized in due time or not. We are sure that being able to grasp or “feel” your way through a VR environment would add to the overall novelty factor in the long run.