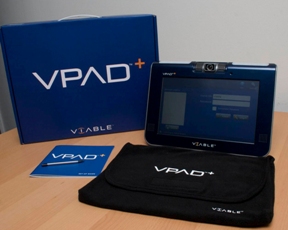 I saw a demonstration of Viable’s VPAD+ at CES Unveiled yesterday. Viable’s products are designed for the hard of hearing, and many of Viable’s designers are deaf.

The VPAD+ uses video conferencing technology like its predecessor, the VPAD. Viable, the company that makes the VPAD+, has improved the old version with some enhancements such as Bluetooth and Wi-Fi compatibility, two USB ports, as well as an improved touchscreen.

All of these new features make the VPAD+ a stand-alone online communication tool that does not require a separate wireless adaptor. When a call is received, The VPAD+ will “ring” with flashing lights. The device is set up like Creative’s videophone so the deaf and hard of hearing caller can communicate via sign language to the person that he or she can see on his or her screen.

The VPAD+ even offers the services of a third party signing interpreter, in case the person on the other end of the line does not know sign language.

I found it hard to believe that a quality video-conferencing phone designed for the hard of hearing has not been released until now. When I asked one of the company reps the reason for this delay, he said the delay was due to the recent improvements in video conferencing technology.

Technology should really be about helping people who are disabled become more able, and I could not think of a better use of tech with the VPAD+. The VAPD+ is expected to be released in the fall with Viable Customer Support. The basic unit is about $99, and the service comes with a ten-digit number for the device.

1 thought on “VPAD+ Helps the Hearing Impaired on the Phone”