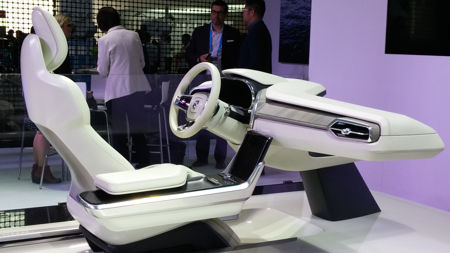 [CES Asia 2016] Volvo’s press conference presented a very interesting observation – the world’s biggest retailer, Alibaba, owns no inventory, while Airbnb which has far more rooms worldwide on offer than any other hotel chain does not have a single home. How about Uber? They are far larger than any taxi company across the globe, and yet does not have a single taxi under the company name. This has led Volvo to see how they can move beyond offering mere cars, as services that fill up niches in our lives are incorporated into vehicles.

For starters, Apple’s Carplay has been tightly integrated with newer Volvo vehicles, where the latest hybrid Volvo XC90 was demonstrated. Using an app on the Apple Watch, you will be able to locate your car at the touch of a button as it honks and flashes its headlights to alert you to its position. Unlocking and locking the vehicle takes another button touch, and you can even make use of the app to know the amount of fuel left in your ride so that you can plan and navigate your way to the nearest fuel station without running on empty.

Volvo’s In Car Delivery service is also pretty useful, as a temporary keycode is assigned to the courier company to drop your ordered goods into the trunk of your Volvo, before closing it and locking your car, rendering said keycode useless afterward. You will then be sent a notification on your smartphone that the delivery is complete. There are some safety considerations to take note of in different countries, as you can never quite tell who might prey on such delivery staff, so a safe implementation of this idea depends on the context in which it is rolled out.

Volvo’s jewel crown at CES Asia 2016 would be its “Concept 26”, where its partnership with Ericsson intends to usher in an age of autonomous vehicles. In other words, you will be able to keep yourself occupied with other more important matters such as attending to a meeting brief, catching up with your family members and friends through phone or video calls, reading the day’s news, or simply kicking your feet back and catching forty winks after a hectic day at the office, as opposed to navigating your way home through a massive traffic gridlock.
Ericsson’s role in this vision is to tailor the bandwidth along the journey in order to optimise the video signals received, be it a movie or a TV series. Apart from that, curated content can be delivered on the chosen route based on one’s individual preferences, so no two rides would be the same. Alas, autonomous cars will take a fair number of years before they become reality, and this will only take off in developed, urban areas where strong and consistent connectivity is not an issue.