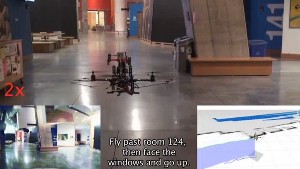 I loved seeing Parrot’s AR.Drone at CES, and I had just as much fun watching the video of this quad-copter, created by the Robust Robotics Group at MIT.

It would appear that this Robust Robotics Group took this thing a step further, but it still requires some sort of iPhone to maintain control. The AR.Drone wasn’t able to take vocal commands.

You can see from the vid that the operator speaks “fly past room 124, then face the windows and go up”. There must have been some speech to text on iPhone, and it would appear that the helicopter can transmit this text into actual commands.

The video has a man simply speaking commands like “up” and “go to the elevators”. It does obey those commands as well, even though these orders are pretty vague. I mean, how does the copter know how high to go up, or what area around the elevators to go to?

I suppose that this could be use as sort of a mini-predator drone, one that is vocally controlled. Hopefully it will know how to obey the order of “get out of there”.

Well, usually anything that is being worked on at a University is concept tech. If they perfect it and market it, then that AR.Drone has some serious competition.