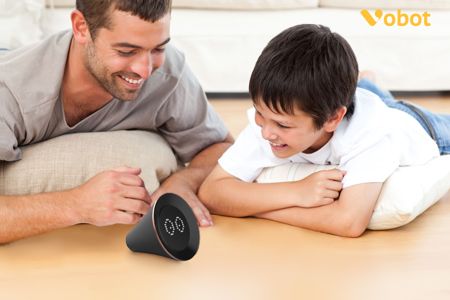 At each CES, you can be sure that there will be interesting new devices that will be introduced to the market. Of course, many of us are interested in the latest and the greatest, but these are not necessarily found in the flashiest of booths. Vobot has worked out quite a charmer of a device, which is the Amazon Alexa-enabled clock.

This new timepiece will be Vobot’s latest AI smart home product, aptly known as the Vobot Clock which will be integrated with Amazon Alexa Voice Services (AVS), and you can expect it to debut at CES 2017 that is kicking off later this week. With Artificial intelligence (AI) and voice interaction being a hot topic last year, it does not look as though the hype and technologies surrounding AI will die down this year. Rather, it should even increase all the more. Amazon Echo is one of the most successful models of implementation, being the first smart home hub that hit the market. Vobot has decided to take advantage of the open platform known as Alexa (by Amazon), making use of AVS (Alexa Voice Service) and ASK (Alexa Skills Kit) as a third-party developer in order to deliver voice experiences for the Vobot Clock.

Based on the Amazon ecosystem, the Vobot Clock is a cost-effective smart alarm that comes with a slew of creative features. Where the sleep coach programme is concerned, you can be sure that the pre-set wakeup and bedtime solution will assist users to fall asleep faster and wake up earlier. The proactive reminder function will then inform or show users the right things at the right time. Not only that, there is a customizable alarm that allows consumers to wake up from their favorite tunes, a dot matrix display that makes everything clear at first sight; an internal 5W speaker which delivers crystal clear sound, all without having to hook up to any external amplifier.

The Vobot Clock is tipped to arrive with an asking price of a mere $35 a pop with an early February release.