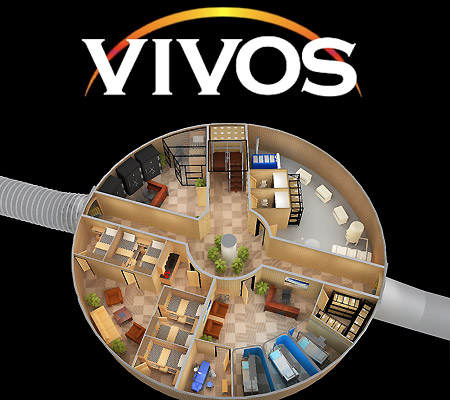 I’m not really into Fallout 3, but the popular video game begins with the idea of starting in a “sheltertown” before journeying into the wasteland.

Fallout shelters since the beginning of the Atomic Age have usually been nothing more than just holes in the ground, but the Vivos “ultimate underground shelter network” is one that I would be glad to stay in. Not that I want some sort of global disaster to occur. I am just saying that the accommodations look much better than a bunker with shelves of canned food. According to Vivos:

Complexes will be deep underground, airtight, fully self-contained shelters designed to survive virtually any catastrophe, or threat scenario including natural disasters, a nuclear blast, chemical and biological weapons, or even social anarchy.

I have included a video of Fox News talking to the head of Vivos, and he says that he has built these 10 million dollar complexes underground in the Mojave Desert. That is about 100 miles from a major city, or ground zero for a nuclear strike, theoretically. The Vivos complexes were designed after cruise ships, and it is apparent that the complexes connect together. Perhaps they are to form some sort of underground city like in City of Ember.

Like it is said in the video, this is the one piece of real estate that you want to own, but you never want to use.