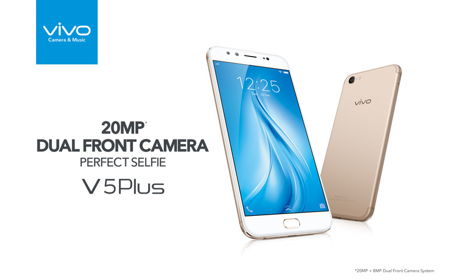 You know that Chinese smartphone companies are big on cramming in as many features as possible — without placing too much importance on the design and form factor, but things have started to change. In fact, companies like Vivo have began to be more impressive with their offerings, and even as recent as December last year, we saw the introduction of the Vivo V5 that comes with a 20MP camera. That might not sound too special at all, but the 20MP camera is located in front, now how about that? Less than a quarter into the new year, and Vivo intends to outdo itself with the introduction of the Vivo V5 Plus, which will feature not one, but two cameras in front!

I suppose the age of selfies with a bokeh effect is going to catch on sooner or later, and you have a China-based company leading the way this time around. It is interesting to note that the Vivo V5 Plus is a smartphone that has been co-engineered with Sony, where it features a 20MP front camera, Selfie Softlight, and a sophisticated image processing algorithm. Apart from delivering 20MP resolution, the f/2.0 large aperture and 5P lenses with 1/2.78” sensor size intends to deliver outstanding portrait shots regardless of the circumstance in which a photo is taken.

With a Bokeh Mode, it will ensure one can obtain professional-grade bokeh effect — but do not expect it to be on par with that of DSLRs or system cameras. However, it should still be able to do a better job than that of other front facing cameras that we have seen in the market to date. Other features that make up the Vivo V5 Plus include a 5.5-inch display with curved edges, a 3160mAh battery, dual-charging engine technology, a Charging Protection System, 4GB of RAM and 64GB of internal memory, and fingerprint recognition. Expect the Vivo V5 Plus to roll out in India, Thailand, Vietnam, Malaysia, the Philippines, and Myanmar later this month.