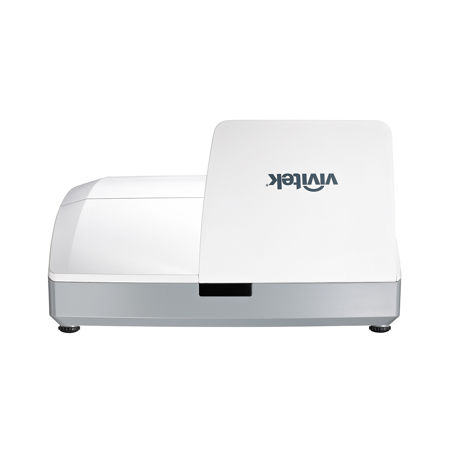 I know that the world of consumer electronics would be far more interested in new devices that titillate the senses such as virtual reality machines or perhaps a brand hew flagship smartphone that comes with everything and the kitchen sink included. Where projectors are concerned, those are not exactly crowd pullers, but projectors do happen to have their own place in the pecking order of things, and it goes without saying that newer models are not only lighter and last a whole lot longer, but also deliver an image quality that is worth checking out. Vivitek is one of the players involved, where they have revealed its next generation of ultra-short throw interactive projectors, namely the DH759USTi and D756USTi.

The DH759USTi happens to be Vivitek’s 3rd generation of HD1080p ultra-short throw projectors, where it will boast of built-in pen interactivity and finger-touch upgradability, while both projectors will ensure that your eyes get to enjoy an impressive image, resulting from the outstanding brightness and contrast ratio of 10:000:1, in their respective native resolutions.

As for the benefits that accompany either the DH759USTi or the D756USTi, they will include full IWB functionality with IR pen support and upgradable 10-point finger-touch interactivity with a finger-touch DT02 laser curtain for intuitive interaction. This interactivity will be further enhanced thanks to the included NovoScreenNote interactive software for Mac and PC for session recording as well as screen annotation and markup.

These projectors are pretty much hassle free to set up, and will require the least possible ongoing maintenance. Not only that, both the DH759USTi and D756USTi will feature low-cost operation with a lamp life up to 7,000 and 10,000 hours, respectively. Your ears will also be able to benefit thanks to the integrated audio speakers that deliver 10W+10W (20W) for clear and loud audio enhancement. Each purchase will be accompanied by an industry leading standard five-year warranty and advanced exchange programs that ensure minimal cost of ownership if you are a bean counter.