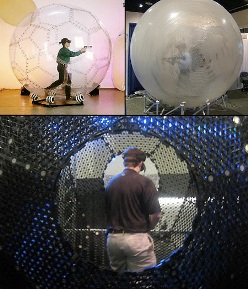 Back in the early nineties, we all thought that the video games of 2010 would be with goggles and a toy gun. We were wrong with Virtual Boy, and we never figured out a way to get a player to run in a game while standing still in the gaming area.

Better late than never, VirtuSphere is here to bring our virutal reality dreams to life. As you can see, the VirtuSphere looks like the Ball of Death from The Simpsons Movie, and it allows a player to move somewhat freely in any direction for the game that they want to play.

There is a video after the jump, and you can see that it takes a team to get a player in this giant, metal, stationary hamster ball. To me, it looks just plain unsteady. I would think that it would get used to, but this player in the vid does not even trip once. The game that he’s playing doesn’t look very good, though. Couldn’t they set it up for Metroid Prime or Tomb Raider?

This video was taken at the Game Developers Conference in San Francisco, and, as you might have guessed, it would be quite expensive to get it on your own. It would cost about $55,000.00, and you would need a lot of space to make it work. Not to mention a team to lock you in, I guess.

I’ve heard that there will be one at the Excalibur in Las Vegas. Maybe I’ll check it out during next year’s CES.