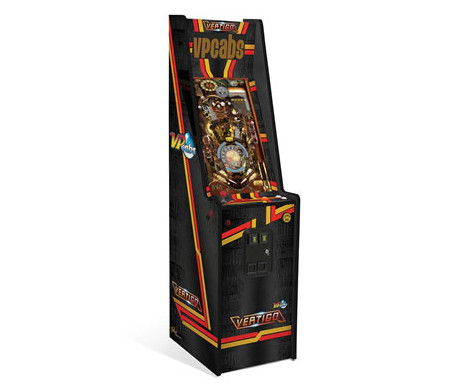 When was the last time you stepped into a video game arcade to have a spot of pinball action? That would be an experience that would normally resonate with those of us who are much older, as the younger people these days have had the advantage of enjoying games on a mobile platform, or spending most of their time glued behind the screen at home on a console or a PC. Well, if you are feeling a little bit more flush these days, how about sprucing up your home’s basement with the $4,000 Virtual 60-Game Pinball Arcade?

This is definitely a big boy’s toy, as this one particular arcade cabinet comes with more than 60 different kinds of virtual pinball for you to indulge in. It is available as a Hammacher Schlemmer exclusive, where this particular machine delivers a library of pre-installed virtual pinball games. Each of these virtual pinball games will come with its very own immersive 3D environments that comprises of animated characters, flippers, bumpers, and ramps. For instance, Star Wars fans will be able to use a lightsaber to launch the ball in Star Wars: A New Hope, while flippers and a digital pinball attempt to ward off a queen Xenomorph in Aliens, with a patriotic superhero seeking out the cosmic cube and sparring with the Red Skull in Marvel’s Captain America.

The Virtual 60-Game Pinball Arcade comes with a 32″ LED playfield that will be able to faithfully reproduce the hallmarks of a classic pinball cabinet complete with the details of their mechanical predecessors while offering razor-sharp 1080p high-definition. This particular machine is also able to download a further 60 classic arcade games, which will correspond with its outward physical characteristics of a retro arcade game. Among them include an OEM-style coin door — although you do not need to feed it with quarters, obviously, a pair of coaxial speakers that reproduce authentic sounds, among others.