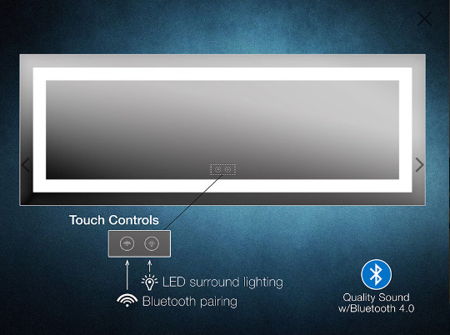 “Mirror, mirror, on the wall, who is the fairest of them all?” is a question that many an adult has heard in their younger days when tales and legends were shared by parents. Such stories captivated the imagination of the little ones, and to have a mirror that has a semblance of intelligence is definitely cool. Fast forward to the modern day, and do we have the equivalent of such a mirror? The answer would be a definite “Yes!”, although do not expect the kind of magic and spells that such an electronically powered device would have. Viio’s Smart Mirror range will help those who would like to look good, even better.

After all, each Viio smart mirror is LED-lit to keep up with the times, and it will also be able to play back music to help you get in the groove when you are grooming yourself to look your very best. An incoming phone call? Fret not, the Viio smart mirror is able to handle it via Bluetooth connectivity, letting you continue without being interrupted. The modern day connected home would definitely do well to have a Viio smart mirror in the mix!

There are three sizes available from Viio at the moment: Vezzo (24″x 32″), Vetta (24″x 64″) and Vero (30″ round). This particular suite of Viio mirrors can be purchased via Viio’s online store as well as at select Home Depot, Best Buy and Lowe’s stores. Those living in the US will have to wait until later this Spring for its availability.

All of the Viio smart mirrors will arrive with high-performing dual sound speakers as well as Bluetooth 4.0 connectivity, without breaking the bank. Other features include LED surround lighting, anti-fog capabilities, an aux connection, a 6-hour lithium-ion battery and permanent plug fixture, sporting a solid wood backing that clearly makes it worth an investment if you would like to spruce up your home.