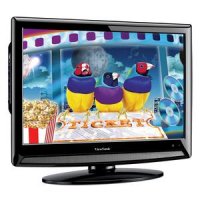 ViewSonic isn’t exactly a brand name that is associated with high end AV equipment, but then again they have been in business for quite some time already for a very good reason – offering enough bang for your buck. The latest LCD TV from ViewSonic would be the N2201w, and this 22″ looker offers more than just high definition images in your living room – it also packs in two other functions for added value for money. Retailing for under the $500 price point, the N2201w also features an integrated DVD player (if only they threw in a Blu-ray drive instead) that is located on the side of the TV as well as PC capabilities.

With living spaces these days getting smaller and smaller due to overpopulation in large cities, one has to learn to make do with the living space available in tiny apartments. The ViewSonic N2201w caters to this need, offering 1080i high definition digital video as well as outstanding image quality for a high end entertainment experience. After all, the digital revolution is well underway and analog TVs are going to go the way of the dodo in due time, so why not hop on the bandwagon now and experience tomorrow’s entertainment quality today? The N2201 is feature rich and won’t burn a whole in your pocket during procurement, ensuring you won’t have to get into an argument with the missus if you want to bring this puppy home.

Granted, 22″ isn’t much to look at, and the lack of full HD might not appeal to some, but the screen size itself wouldn’t make any difference if the image was shown in 1080p since the eye can’t discern the detail difference at that level. Other features of the N2201w include a resolution of 1,680 x 1,050, 5ms response time, a contrast ratio of 1,000:1, wide viewing angles, ATSC/NTSC/QAM digital TV tuner and HDMI connectivity, and a PC input that helps you connect computer sources. The ViewSonic N2201w has been listed at $429 and will come with a one year warranty.