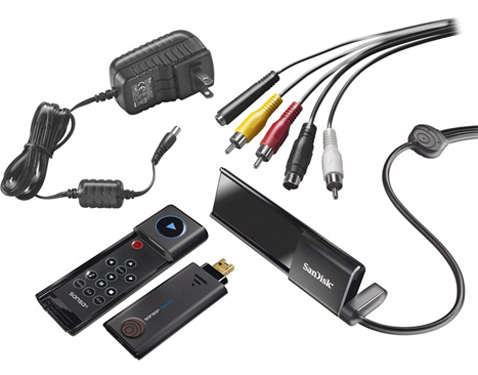 Well, it takes just a tad more than that. But thanks to SanDisk’s TakeTV, video fans can now download their favorite DivX, Xvid, and MPEG4 videos from the web and watch them on TV simply by dragging them onto a USB drive and then plugging the drive into the PC via this special gadget. There’s no encoding, no authoring or burning to DVD, no networking. Just a simple drag and drop. The TakeTV does this thanks to the video-out docking station, which translates the PC video format into a signal the TV can read. The TakeTV docking station accepts the USB drive an, like a palm sized DVD player, sends the TV signal via the composite, S-video, stereo audio outputs. The Take TV couldn’t be simpler.

Even the blinking 12:00 VCR crowd can handle this gadget. The only downside is that the TakeTV only accepts two three formats, meaning that Quicktime or YouTube fans will have to some re-encoding beforehand.

Along with the TakeTV, Sansa is busy putting the finishing touches on it’s premium download service called Fanfare, which will allow users to download movies and TV shows –iTunes style – currently from CBS and Showtime for a few dollars. Ultimately, ideas like this represent the best means to minimize the effects of online video piracy. Making pay content easier and more affordable to use will give users the very excuse they need to legally download the things they want to watch. Witness the popularlity of iTunes & the iPod. TakeTV could be the very same idea made for video.

And there may even be a free, ad-supported option in the near future. But frankly, what’s the point of that? Unless users want to dump that monthly cable/sat TV bill.