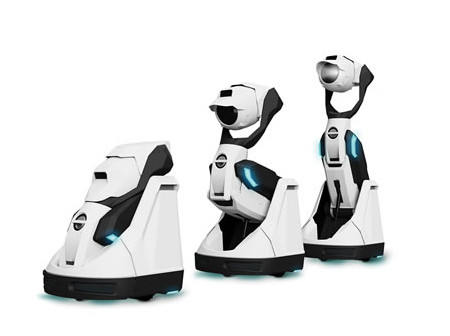 Projectors are nothing new these days, although the kind of technology that goes into them have definitely improved by leaps and bounds. As we get to enjoy clearer, brighter images with a higher resolution count, all rolled into a body that is more portable, how many projectors do you know out there that are brave enough to explore a form factor that is very different from that of a regular rectangular box? Enter the $2,500 Video Streaming Robotic Projectionist.

The first question that most people will ask when they set their sights on the Video Streaming Robotic Projectionist would be this, “Is this a robot first and projector second, or a projector first and a robot second?” The answer to that question is a silent one, you simply will need to spend time with it yourself and then draw your very own conclusions.

The Video Streaming Robotic Projectionist is a mobile robot that has the ability to wirelessly project images and streams videos from the Internet. It can project an 80″ picture on any surface from 9 3/4′ away, and this would free a crowd of viewers from having to huddle around a tiny smartphone screen so that everyone is able to view social media content or perhaps the latest trending YouTube videos. There is also a free app for Apple iOS and Android devices which will allow users to remotely control the robot, allowing the user to command its every roll, pitch, and yaw.

Do take note that the kind of money you pay for this will not offer that much in terms of video resolution, since it maxes out at just 720p HD projection. It is also best to hook it up to another sound system, since the integrated 5-watt speaker is not going to impress anyone. I suppose most of the money would have gone into its robotics than anything else. The app is versatile enough for the user to alter the image’s orientation, adjust the volume level, change content, and schedule a specific time and place for a pre-planned picture show. Connectivity options include USB, HDMI input and media connections.