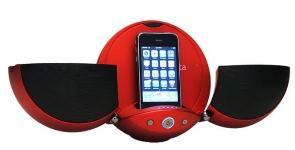 I first encountered Vestalife at CES 2008 with their unique Ladybug iPod dock, and I am surprised that it took me this long to report on another one of their products. While I was at CES 2010, I saw that they had the Ladybug II.

Ladybug II, is of course, an upgrade of the Ladybug, and it has the Vestalife look of flippable speaker wings. It also has a digital amp, and a built-in sub woofer. It is designed to work with all styles of iPods and the iPhone 2G, 3G, and 3GS, and charge them as well.

As for the power of the Ladybug II, it uses an AC or 4 non-included AA batteries. It also has an auxiliary in-jack to connect non-docking iPod, CD players, and other MP3 players. So it looks like you can play some other tunes on this guy besides just the ones on your iPod/iPhone, which is not bad. Most iPod docks are not as versatile as this.

Of course, there are other fun features such as LED volume indicators, audio/video output jack, a USB port for synchronizing with your computer, and a 3.5 mm Aux input. Now, just to let you know, I have been told that Vestalife’s products will be sold at Apple retail stores and apple.com.