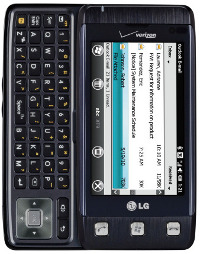 Both Verizon Wireless and LG has come together this time round to offer a brand new cellphone for the masses known as the LG Fathom, where it will make its appearance on Verizon Wireless business sales channels from May 27th onwards, while those who prefer to pick it up online and in Communications Stores can do so from June 3rd onwards. This smartphone is touted to be the ultimate on-the-go office (although we are sure that many other folks who are extremely happy with their smartphones will beg to differ), where the LG Fathom redefines productivity with Windows Phone power (hmmm, isn’t Windows Phone stuck in a rut at the moment without any sight of Windows Phone 7 bringing them to the promised land?), stylish design and smart global capabilities.

The LG Fathom will come in a sleek slate blue case which is suitable for both in office as well as playtime use. You will be able to take advantage of the relatively large 3.2″ touchscreen display complete with Improved Touch Experience and vibration for tactile feedback, where a snappy 1GHz processor will run proceedings from within to make sure you are always up to speed in all your tasks. A microSDHC memory card slot (up to 16GB) is there for memory expansion purposes just in case the phone does not have enough storage space for all of your data and media. If you’re not a fan of a virtual keyboard, fret not – there is always a full slide out QWERTY keyboard for you to go old school. Connectivity options include Bluetooth 2.1 and Wi-Fi b/g/n, while it is able to handle playback of MP3, WMA, WMV, MP4 and 3GP file formats without missing a beat. The LG Fathom also doubles up as a USB mass storage device if you hook it up to a PC via USB, while a 3.2-megapixel camera ought to be enough to capture all of your favorite moments.

Expect to fork out $149.99 for the LG Fathom after a $100 mail-in rebate, and of course, agreeing to the customary 2-year service plan.