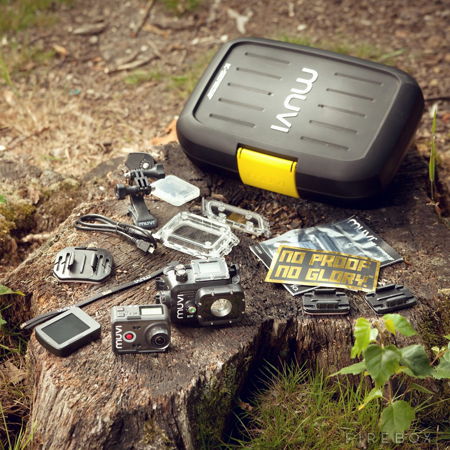 They say that a picture speaks a thousand words, and since a video comprises of many pictures being played back in quick succession to provide a sense of optical illusion, it speaks volumes. So much so that sometimes, the adventurous , adrenaline pumping experiences of yours that you share with others do not carry the same effect or weight as much as a video recording itself. Hence, the £239.99 Veho Muvi K-Series Wi-Fi action camera is a strong contender for those who tend to live life on the edge and would like to let their family and friends “catch the vision”, so to speak.

The Veho Muvi K-Series Wi-Fi action camera will be able to handle High Definition video capture by shooting 1080p at 60fps and 720p at 120fps. Apart from that, it comes with its very own waterproof case, so that you can even swim with some fishes out there, as long as you do not surpass depths of 100 meters, you and the camera ought to be fine. To make sure that whatever you capture will be shared with the masses as soon as possible, it will even be Wi-Fi enabled so that it can offer wireless streaming and remote recording. As for battery life, the 1,500mAh battery enables one to record non-stop for up to 4 hours, which surely is long enough a time to surpass even your previous exhilarating experiences. Apart from that, it can also shoot 16MP stills with burst mode and timelapse modes, and there is a slew of versatile accessories to choose from to enhance your video recording experience. Any takers?