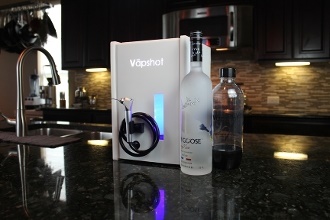 As human beings, we are fragile creatures who often forget our own limitations. While we have the ability to be level-headed, it’s easy to forget how things like alcohol and prolonged indulgence of vices will later come back to bite us. Having a drink once in a while won’t overdo it, but it certainly isn’t a grand idea to be a regular habit.

If you want drinking to be more of a social habit, then the Vapshot might be just what you need to feel a buzz without killing your liver. This is a drink vaporizer that turns your booze into a vapor. Yes, instead of drinking, you’ll be inhaling alcohol. It’s only a few drops, so you don’t have as much worry with overdoing it, but it will get you feeling fine and fancy free in a matter of seconds rather than a few minutes.

To use, put in your favorite drink, insert the needle into the special cap on the bottle, hold for twenty seconds, and pop open. You’ll only need a straw to suck in the vapors, and will immediately feel the effects. This will cost you $699, and would be perfect to keep the momentum at parties going. As you’re not taking in much alcohol, it will be easier for it to move out of your system faster. It’s certainly going to make a statement at any gathering as it’s not common, but will likely require some maintenance over time.