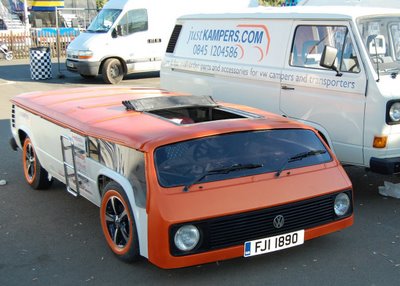 If there was a limbo competition for cars there is now no question on who the winner would be. How low can the Vancake go? Try this out for size. This mini-Volkswagen bus is only 3-feet and 1-inch tall. Meaning for the average 6 foot man, this automobile only reaches to around the waist area.

Officially known as the Camper, but affectionately titled “Vancake”, this super low-rider is the world’s lowest Volkswagen bus. Call us crazy, but we don’t see this niche having a super stringent competition at this point. And to add even more to its wonderful allure, there’s a little back story to go along with its awesomeness.

Designers Just Kampers and Andy Saunders created the Vancake in only three days! Working away during the Bug Jam festival at the UK’s Santa Pod Raceway from June 18 to June 20, the team managed to remove the Volkswagen’s roof, equip an electric sunroof, and completely redo the car’s previous paint job to give the Vancake a more scaled feel.

The Vancake is not only totally snack sized, but is also totally street legal. The only thing we’d worry about is getting rear-ended by fellow drivers who are fascinated by our tiny car. For only three days of work, we’d say it’s a hell of an accomplishment.