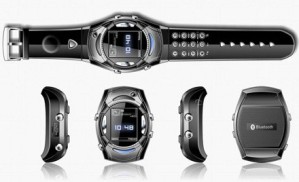 Remember how Dick Tracy used his watch as a communicator? Considering the last incarnation of Dick Tracy came out in 1990, I’m not surprised if you don’t. Let’s try this one: Remember when Michael Knight used his watch to talk to KITT? I’m sure anyone eighteen years of age or younger has no idea what I’m talking about.

Well, here’s a wrist communicator that anyone from any generation can understand: the Van Der Led WM2 Watchphone. I have only three words to say about this: “Yeah, baby, yeah!”

After all, science fiction writers have envisioned communication devices on our watches for years. Isn’t it about time that someone made it into reality by putting a cellular phone on a watch?

This Van Der Led WM2 watchphone is a quad band GSM, and it has some very interesting features including a 1.3 inch 260K TFT touchscreen, an FM tuner, 1 GB worth of storage, stereo Bluetooth, and USB data transmission. It has a stand-by time of 240 hours, and a talk time of up to 300 hours. I was surprised to hear that it even has a 1.3 Megapixel camera.