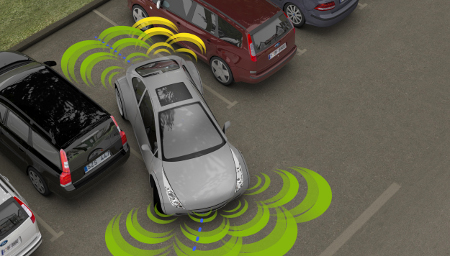 So it took you a fair number of times to pass your driving test, as when it came to crunch time to park your vehicle, you tend to make a mistake here and there that blew the entire test. Assuming you finally passed (much to the chagrin of your instructor as well as yourself), parking is still a potential issue, which is why we would advise you to drive home the new Volkswagen Touran or Sharan next time you want to own a vehicle. Why so, you ask? Well, Valeo’s Park4U system will be implemented in both vehicles, being the latest generation semi-automatic parking system from the company itself that will rely on ultrasonic sensors which are located in the front and rear bumpers in order to precisely calculate the length of the parking slot available, while automatically maneuvering the car into the slot.

Sounds pretty neat, don’t you think so? It is made all the more surprising (pleasantly speaking, of course) that the new version will require a mere 40cm of clearance at either end of the vehicle in order to park, which is a rather impressive reduction of 43% compared to the first generation. This is now possible courtesy of a more sophisticated geometric calculation. Apart from that, steering assistance will no longer stop when the car first goes into reverse, but will continue to be engaged to help you until the whole vehicle is parked, regardless of the number of maneuvers required even in a short parking slot.

Park4U will also help you get out of a parking space, despite it being extremely tight (we’re talking about a 25cm allowance on either end). It will first go about its duty by assessing the space which is available on both in front as well as behind the vehicle, calculating the number of maneuvers it must make and then going about its business. You as the driver will remain in full control of the speed of course, but it would be a good time to talk over the phone since the system will take control of the steering, as when parking. It is also smart enough to detect the best moment to exit the parking space, while automatically deactivating to let the driver merge into the traffic.