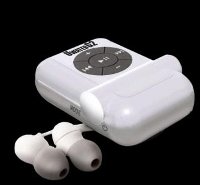 Do you think that the world is obsessed with superlatives? Otherwise, why would there even be an almanac known as the Guinness Book of World Records that sell by the millions annually? The longest, fastest, fattest, thinnest, tallest, smallest, biggest, you name it, they’ve got it. The UWaterG2 waterproof MP3 player intends to go along the same vein, being touted as the smallest 100% waterproof MP3 player and earphones in the world, although we haven’t really put their claims to the test – yet. It is certainly an interesting claim, and since we don’t listen to music while we swim, it would be hard to verify just how waterproof this puppy is. More on the UWaterG2 in the extended post.

Boasting a Twist & Lock Jack that delivers double protection for the device, this micro-sized MP3 player can be clipped onto a pair of goggles or even fastened onto a headband, armband, or belt. We don’t think those who are practicing their lap times might want to have this, as the tradeoff from having your favorite DJ spinning his/her tracks against the additional resistance (negligible, some say) might not just be worth it. We’re thinking this will target the more casual swimmers, or even those who want to spend some time by the pool but without having to worry about their iPod getting sloshed.
The Twist & Lock earphones jack will ensure that it seals water out completely, but there is also another function behind the idea – to provide crucial long term protection against corrosion, a problem which is more often than not associated with damage to other devices through the use of regular jacks. Right now, the UWaterG2 will retail for $59.95 as part of its promotional price, so get it sooner rather than later if you don’t want to pay the full amount. Oh yeah, what better way to remain fit and trim after the year end festivities and gorging than to go swimming with your favorite tunes?
Press Release