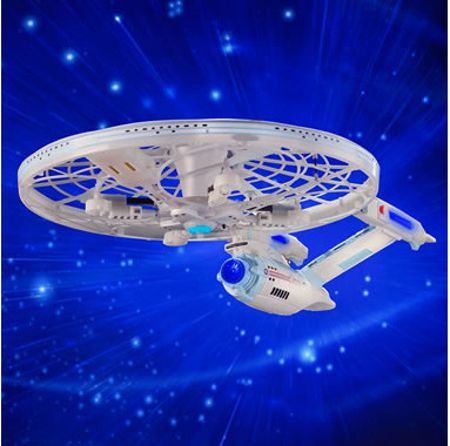 If you are a huge Star Trek fan and would love to have just about anything and everything that has to do with Star Trek, then it would not be too far away to imagine that a drone that comes in the form factor of the U.S.S. Enterprise would escape your attention. The $129.95 U.S.S. Enterprise Quadcopter is the ideal toy to have if you would like to issue orders from your command chair, so that the crew would be able to carry out your whims and fancies.

This happens to be the only remote controlled flying U.S.S. Enterprise that explores strange new yards and seeks out new life and new civilizations. It has been specially modeled after Captain James T. Kirk’s famous vessel as seen in the 1979 motion picture, sporting a quartet of 3.5″ diam. propellers that are part of its iconic primary hull, as it delivers backward, forward, up, down, or sideways movement. It will even be able to play 10 sounds from the original TV series, such as photon torpedoes and red alert, while the 10 LEDs replicate the ship’s hull and nacelles’ lights. With a one hour charge, you get up to 7 minutes of flight time, sans warp drive, of course.