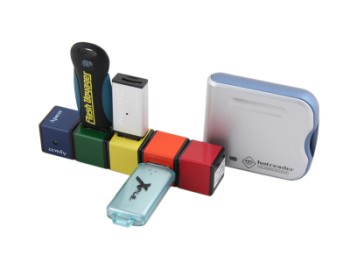 If you liked the previous rubik cube gadgets we showed you – like the Rubik Table and the 3D Sudoku – you will probably going to love the “magic” USB Hub as well because it has a usability feature unlike the rubik table that is just good as furniture.

The magic behind this rubik cube that was transformed into a USB hub with 4 ports, is that 2 of those ports are able to rotate to 90 or 180 degrees – this means two things: more space and also big USB devices can be connected at the same time and there won’t be a problem.

The other 2 ports can serve for the smaller USB devices such as small flash drives. To match the exact “rubik theme” the hub is formed by 5 cubes that have the same colors as the magic cube, those colors being red, orange, yellow and blue.

When using USB devices one thing that worries me is the version they feature, there are some devices that still use old versions like 1.1 and these ones have slower transfer rates. The current and universal USB version is 2.0 and that’s what the Rubik USB Hub uses, it can support high-speed transfer rates of 480 Mbps – megabits per second, not megabytes.

It can be considered an upgrade to the similar USB hub we mentioned back in June, this new one is better and costs $20 at USBGeek – such a small price to pay for a cool and useful gadget.