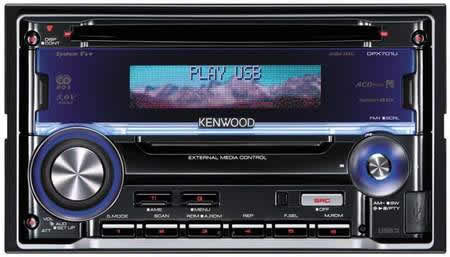 More and more cars are coming with options to hook up your music player to the stereo directly from the factory, but there are still a lot that don’t, and people that want more control than that.

If you’re one of those people, check out this new Kenwood radio that is, for the first time ever (in a Kenwood device), USB mass storage device compatible.

That means you can hook up any USB mass storage device to the stereo and have all your music playable. As always, you can still pop in your old CDs, but who actually uses those anymore? This stereo handles pretty much all of the common audio formats, MP3, AAC, and even WMA, as if anyone uses that!

Don’t rule this one out quite yet you iPod lovers, there’s an optional accessory that allows you to hook up your iPod, probably via the dock connector, and play your music that way. You can even select songs to play just like you would do on your computer.

The rest of the details on these devices, four have been announced, are slim to none, but I wouldn’t expect anything else as cool as this. No details about the release date or price have been released yet.

It might be a bit weird to have a thumb drive sticking out of your stereo, but it sure beats burning 10 CDs, of course, you could even hook up your 8 GB T.One portable hard drive, although sorting through all that music while driving could prove dangerous.