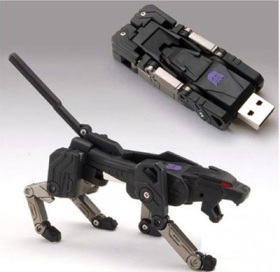 One of my favorite Transformers was Ravage, one of several pet robots from Soundwave. In case you don’t know who Soundwave is, he was a Decepticon (the bad robots) who could turn into a cassette recorder. Soundwave had a bunch of tapes that he could miraculously store inside him, and Ravage could turn into some sort of demon cat.

Of course, no one uses cassettes anymore. I suppose that Soundwave’s minions could be CDs, but how are they going to transform into robots? Even if they were to morph like the T-1000, CDs are becoming an outdated medium.

I suppose in a modern world of Transformers, Soundwave would probably transform into an MP3 player, but what would his tape/minions be? How about something that could store MP3s, like a USB Flash Drive.

You have to admit, my logic makes a lot of sense. The Ravage Transformers USB Flash Drive comes with 2GB worth of storage, and is compatible with Windows 98, ME, 2000, XP, and the Mac.

You should be able to pre-order the Ravage Transformers USB Flash Drive for $42.99. For an extra $2, it will ship in some collector’s grade packaging, so it can sit on the shelf and build up value as a collector’s item.

Oddly enough, it won’t ship until September, which is long after Transformers: The Revenge of the Fallen will be in the theaters. I would have thought that this Flash Drive would be released in tandem with the would-be successful movie sequel, but I’m guessing we won’t see Ravage in it. Too bad. He would have looked neat as a CG charater.