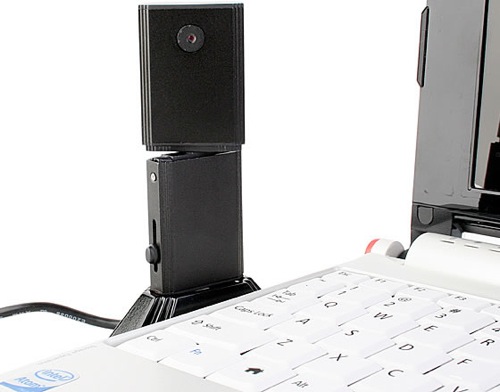 Although this isn’t the most aesthetically appealing webcam I’ve ever seen, at least they were kind enough to combine it with another gadget.  It’s actually the absolutely most plain webcam I’ve seen around.  It’s just a plain black bar that can swivel around to get the optimal angle.  It also tosses in a small flash drive, so it doesn’t do just one thing.  It’s not a combination I can think of a single reason why I’d need it, but it’s probably just one of those things that some people need for very random reasons.

Despite having two different devices in one, the specs on this are pretty basic.  The USB drive itself has 2GB of storage to hold your various MP3s and documents.  It has a few different automatic functions such as exposal control, flash control and white balance.  It works driver free for Windows XP and Vista only.  You can purchase the USB 2-in-1 Web Cam with the USB drive for $33.