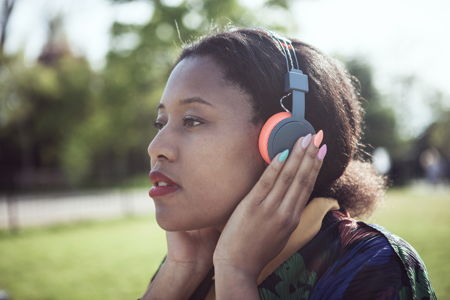 When it comes to owning a good pair of headphones or earphones, you can be sure that the folks over at Urbanears have got your back. After all, they have had their fair share of stunning looking devices in the past, and this time around, it looks as though they are going to continue in that grand tradition, revealing the Limited Sweat Edition headphones to the masses. This pair of headphones have been named in such a manner for one simple reason – it intends to put the beauty of sweat in the spotlight.

The Limited Sweat Edition has been developed in collaboration with seven stand-out individuals from music, sport, and fashion industries, and you can be sure that each of these luminaries have been given their own Hellas headphones from the Urbanears Active collection to wear when they are indulging in the workout of their choice.

Three of these special editions have been created by running coach Knox Robinson, dancer ‘WilldaBeast’ Adams, and musician Amanda Bergman, who can be spotted sweating it out in the Mojave Desert in a short film, which adds to the visceral nature of the headphones. Knox Robinson said, “There’s a crucial connection between music and running. The two don’t rely on each other per se but when combined in the right way the results can be amazing.”

Apart from the three mentioned, others who are putting their sweat-soaked headphones up for sale happen to be British singer V V Brown, American model Barbie Ferreira, German fashionista Bonnie Strange, and French DJ and entrepreneur Nadege Winter. You might think that these headphones would stink with all of their sweat, but I suppose the more artistically inclined among us might figure out otherwise. Fret not for your nose though, as each pair of the Hellas headphones have been sealed in a bag post-workout, signed and labeled with the details of the sweat-session.

Buyers will be forced to make an important decision – either to either keep the headphones as a collectors item, or to open up the bag and put them back into use. You might want to take advantage of the Hellas’ ability to remove its washable headband and ear cushions and get some washing done before you “mark” it with your own sweat.