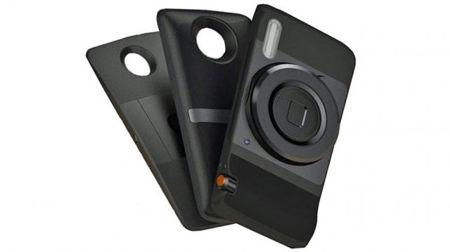 It looks like the folks over at Lenovo are working pretty hard in order to roll out some bit of continuity to its Moto X range of smartphones, thanks to the upcoming Moto Z range (which will most probably have a Moto Z Droid Edition as well). In fact, the new flagship smartphone is said to sport interesting snap-on accessory cases, which will be known as MotoMods. Hmmm, it does sound rather familiar, the idea of a modular device, and LG has already done that with its LG G5 earlier this year.

MotoMods will be slightly different though, as each case is touted to be semi-modular and carries a distinct function. There will be one with an additional battery within, while another will offer stereo speakers as well as an integrated pico projector to expand your mobile entertainment options, now how about that?.

Not only that, there is yet another case that will be camera-oriented, where it sports a dedicated camera sensor, lens as well as flash. All in all, it does look as though modular smartphones are the future, and do expect to see many other major manufacturers jump on the bandwagon if the idea takes off across the board. It would be interesting to see what other kinds of add-ons will be introduced down the road.

Just as a refresher, the upcoming Motorola flagship smartphone is said to run on a Qualcomm Snapdragon 820 chipset, 4GB of RAM, and has a choice of either 32GB or 64GB of internal memory, accompanied by a 5.2” QHD AMOLED display.

All in all,Lenovo are expected to make the Moto Z official at the upcoming Tech World conference in San Francisco this coming 9th of June, so if there are still any unanswered questions that we have, we do hope that the answers will be forthcoming on that particular day.