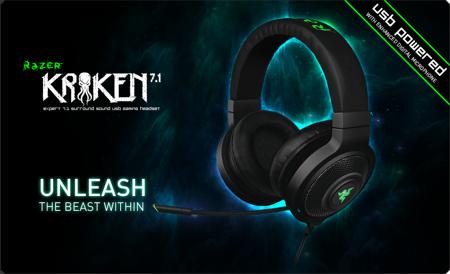 Gamers are extremely particular with the kind of hardware that they use, as they continue to see just how far one can push their gaming limits with their natural talent and superior hardware. Well, Razer, a company that has long been involved with gaming hardware and peripherals, have rolled out the Razer Kraken 7.1 Surround Sound USB Gaming Headset which is said to deliver personalized positional audio and an enhanced digital microphone. This definitely sounds like something worth investing in, as it could be the missing piece in the puzzle to your gaming greatness, since you already have a top notch keyboard, mouse and gaming rig, no?

Based on a similar platform as the analog Razer Kraken Pro headset, which was then considered to be the most comfortable headset in the world, the Razer Kraken 7.1 USB gaming headset builds will feature an advanced virtual surround sound engine that is able to deliver ultra-low latency audio processing, hence simulating a 360-degree surround sound experience which normally can be achieved only through the incorporation of more than one positional speaker driver in each ear cup. Apart from that, it is also driven through Razer’s powerful Synapse 2.0 unified configuration software, enabling the engine to achieve a high degree of customization so that you, the gamer, can have a field day tweaking and specifically positioning each surround sound channel, boost bass levels and even balance incoming voice audio for astounding aural precision.

Not only that, with an omnidirectional digital microphone which will be equipped with an optimized algorithm, you can be sure that your commands to other team members will be sent in a crystal-clear voice, where it will be accompanied by a mic mute button and an LED indicator on the tip that lets you know just when the microphone is active or not. Already available to the masses, the Razer Kraken 7.1 Surround Sound USB Gaming Headset can be yours for $99.99 or €99.99, depending on which side of the pond you reside on.