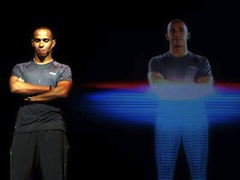 Apparently, someone really wants an age of holographic telecommuting. So that when we want to talk with someone on the phone or webcam, we will see an actual life-sized hologram of the person that we are talking to, like in Star Wars.

I’m seen some attempts at creating this effect, such as will.i.am’s coverage of the 2008 election on CNN, plus this other glass-projection at the International Stationery and Office Products Fair in Tokyo, Japan.

Some researchers at the University of Arizona are very intent on creating holographic videos in real-time, and recording one’s holographic “telepresence” is as difficult as you might think.

It requires the setup of about 16 different holographic cameras in a semi circle format around the callers. These specialized cameras then shoot an individual image, and then store the images in such a way so a new holographic “frame” can show up every 2 seconds.

Keep in mind that most video is shown at 30 frames per second, so you would probably see the lag time of these current holographic calls. However, it used to be the image refresh on a holographic set-up such as this was once every 4 minutes.

Well, I suppose that we can all imagine the world this perfected holographic telecommuting technology will create. I can’t wait to see the new holographic online world.