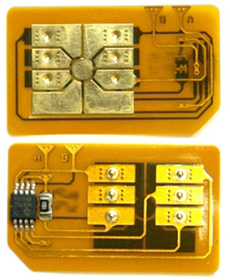 All contract phones come locked on to a specific network when you purchase them on contract. This is to prevent you moving on to another network with your phone and thus, not paying your initial phone provider any more. If you are based in the UK then it’s good to know that unlocking a mobile phone is NOT illegal. Mobile phone manufacturers build mobile phones with no network restrictions and it is the network providers who lock them on to their networks. With it not being illegal there are a number of software and hardware solutions available to unlock your mobile phone. However, this has made the manufacturers of phones make stronger locks to prevent you from doing this and keeping the network providers happy.

Due to the complex unlocking systems now built in to phones it isn’t always easy to unlock with software. A number of solutions have been made available to combat this problem. This latest one is called the Universal SIM Unlock card which claims to be able to unlock most network-locked GSM mobile phones (including 3G phones). It costs $23 and you simply put the unlocking card in your mobile phone’s SIM slot along with your regular (or other providers) SIM card (it sits in between the SIM card and the contacts on the phone. Once this happens you are granted access to the new network and can make a call. Apparently this version does not really touch your mobile phone’s firmware and keeps it completely clean. Once the card is removed the phone will remain locked. This benefits those who’s countries might make phone unlocking illegal.

The list of compatible phones is rather large, so it would be worth checking it out over at USBFever.