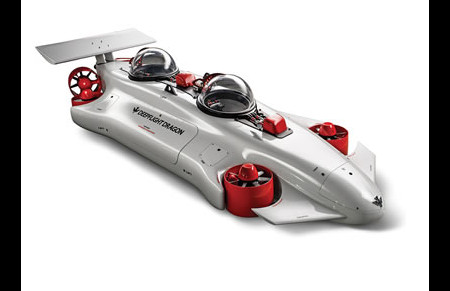 Most of the time, when we think about exotic cars and the ilk, chances are the names Ferrari, Porsche and Lamborghini would crop up, and these high powered machines that do require a fair bit of skill in order to drive are not exactly cheap and affordable, either. They have also been transformed to be status symbols and featured in many a rapper video that entices people to work hard and purchase it. However, if you would really like to impress your date, how about bringing her out on this $1.5 million Undersea Aquahoverer?

The Undersea Aquahoverer is touted to be the easiest submersible to operate in the world, simply because it hovers in-place and does so without having the need to adjust its ballast or to manage drop weights. It will requiring no more skill compared to driving a car, and the sub’s fixed positive buoyancy would be merged with its half dozen 400-rpm, 1.2-kilowatt ducted propellers, where two are in front and another four at the back, delivering easy omnidirectional movement and stand-still hovering underwater next to reefs, wrecks, and underwater species.

It is full well capable of exploring the twilight zone right down to a depth of 400′, where its streamlined composite hull will ensure that both of the explorers remain safe and sound within the climate-controlled, 5 3/4″-thick acrylic pressure hemispheres as well as comfortable in custom-fit carbon fiber seats. The Undersea Aquahoverer will also boast of intuitive and fly-by-wire controls (from either cockpit), a pair of independent digitally monitored oxygen systems, as well as a closed-circuit internal (and VHF-to-surface) communications system to deliver submariners a safe and flexible environment for investigating underwater anomalies. The whole craft will run on a rechargeable 15kWH battery, and of course, when you drop down such serious coin, it would be unthinkable if it arrived without any kind of training at all to let you get started. Hence, the Undersea Aquahoverer will iInclude its fair share of comprehensive training before you go underwater.