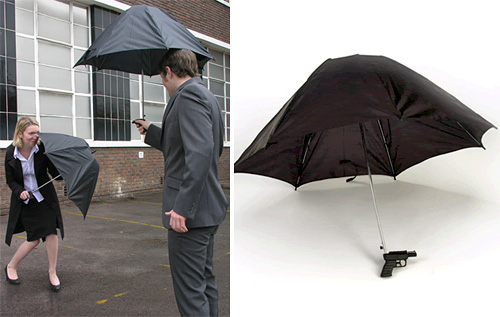 Just to let you know, this particular device is not out on the market yet. Which is too bad, as I can think of a few mischievous uses for an umbrella that also has a squirt gun.
After all, if it is raining outside, you might as well be funneling the water on the top of the umbrella into a squirt gun on the handle. Too bad this gun is too obvious, as it would have been better as a concealed weapon. After all, who wouldn’t want to be the only one who stays dry in the midst of umbrellas while it is pouring out? Let the other umbrella-bearers be wet and not know why.
You will notice in the image that someone with an umbrella is using it to block this squirt-gun umbrella. I would imagine that this person who is blocking the water attack is probably getting more wet from the rain.
I don’t know about you, but I remember being the only one with an umbrella in the midst of a crowd, and you don’t need a squirt gun if you want to get someone more wet. Just tip the umbrella down and dump the water on top of them.
I’m not saying that this squirt-gun umbrella would not be needed, but getting people wet could be easier. This is presently a concept by Alex Woolley, but I can see it being marketed as a joke gift.
Source