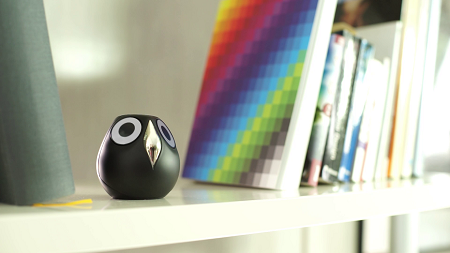 If you’ve ever had pets, you know that when a dog barks or the cat starts nearing a vantage point by the door that someone is outside. While they do a great job of warning you that things are amiss when you’re home, they can’t exactly call you up to tell you a burglar is coming in through the window. If you live in an area where a surveillance camera would be useful, then why not choose a camera that is cute and unassuming?

If you like owls and need some kind of home surveillance system, Ulo is going to be the best thing you’ve seen all week. This is a tiny round gadget that doesn’t look like much until its eyes light up. This is an owl that will communicate with you through expressions in its eyes, which are two round 1.22” LCD screens. In its two-way mirror beak is a camera and motion sensor, with a microphone at the base. On the top of its head is a capactive button that you tap once to turn on or off, and two taps will put Ulo in alert mode.

Through this adorable little owl, you’ll get live video, instant photos, and it even has night vision so you can always see if something isn’t right at night. To make this a bit more personable, more than the already expressive eyes, Ulo has a built-in speaker to “talk” with you through customizable sounds. You will need to recharge Ulo, and it will look sleepy when it’s running low. You only need to set Ulo on a surface or use one of the adhesive magnets which will easily mount it anywhere you’d like to start keeping better track of the goings-on in your home. This is going to cost $167 through the Kickstarter campaign that is presently overtly successful, and in it’s last hours of funding!