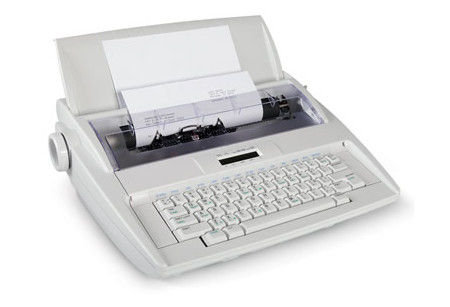 When the typewriter was invented, it certainly made it a whole lot more efficient when it comes to writing letters and documents, official or otherwise. However, typewriters can still make mistakes – as in, grammatical errors which boil down to the human using it. When we migrated to using word processing software to get the job done in double quick time, without having to waste paper and use correction fluid, there was also another potent “weapon” in the digital arena, which is that of a built-in spell checker. Well, here is an updated typewriter that might help bridge the gap between the old and new school items. Namely, the $199.95 Typo Preventing Electronic Typewriter.

The Typo Preventing Electronic Typewriter happens to be an electronic typewriter that sports a built-in typo-flagging dictionary alongside a full-line memory which would allow you to correct your work prior to committing it to paper. It is ideal for those who actually prefer the feel of a traditional typewriter, and yet appreciate the helpfulness of word processors. When you are in “display” mode, your typing can be previewed on a 16-character LCD panel and it will not print until you arrive at the end of the line. There is a 78,000-word electronic dictionary that will release an audible alert each time it detects a misspelling, so that you can correct that mistake before it is printed. Even if a typo slip through, there is the built-in lift-off correction system which allows you to right the wrong.