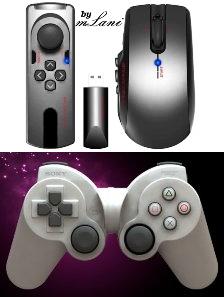 I’m not really a fan of the Sony PS3, I’m more of a Wii guy. I guess I like the simplicity of the Wiimote compared to the button munching, finger cramping PS3 controller.

It appears that someone has developed some new controllers for the PS3 that are a little less burdensome on the digits. The first is the mLani Wireless FPS Controller. This is designed for those players who love PS3 games like Fallout3 and other First Person Shooter games, but would rather play them like they would on their PC. There is a mouse and what looks like a tiny joystick.

The second is a concept called the DualShock Vortex. This is simply your average PS3 controller, with a twist. The twist is that hinge in the middle there.

I’m not certain why, but someone designed the Dual Shock Vortex who the user can control it by twisting. I suppose this is for Hang On type games where the controls are like motorcycle handlebars. I’m not certain how this would come in handy for the aforementioned FPS games.

Maybe you should keep both controllers on hand for both types of gameplay. Unfortunately, none of my sites have any word on price or availability, for now.