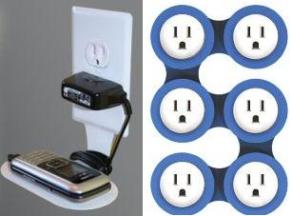 The first is the Power Shelf, designed by Lynn Fetzer-Westmeister. It is simply an outlet with a shelf. The inventor had the inspiration one day when she realized that she could plug her phone in to be charged, and have a nice place to rest it. They even have a model that is built for laptops.

The Second is called the Movable Power, and it looks like some sort of power strip puzzle game. Why would anyone want this? Think about all the bulky plugs that you have that take up way too much space on the power strip. My laptop cord has an angle to it that only allows it to be used on the edge of the power strip.

Right now, the Movable Power interchangeable power strip is merely a concept from out friends at Yanko Design. As for the Power Shelf, you should be able to get that now at varying prices. The one for the cellular phone is about $15.95, but the one for the laptop is about $59.95.