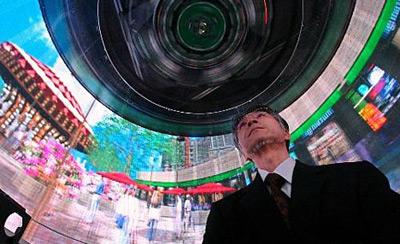 Researchers from the University of Tokyo, led by Susumu Tachi, have developed a unique display that allows viewers to be immersed in a 3D video environment. The Telexistence Wide-angle Immersive STEReoscope, a.k.a. TWISTER, is the world’s first full color 360 degree 3D display that does not require the use of special glasses to visualize the effect. This could work great in combination with a 360 camera, which you can get quite for less than $200 today. 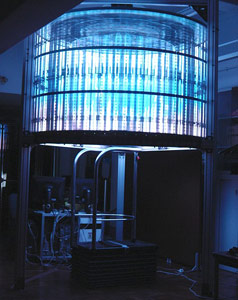 Professor Tachi has spent more than 10 years researching and developing the device, a cylindrical display with over 50,000 LEDs positioned in columns. As the display rotates around your head at 1.6 revolutions per second, the LEDs show a different image to each of your eyes, creating the illusion of a 3D image using the “binocular parallax” effect.

Now all you can watch in TWISTER are pre-recorded 3D video from a source such as a computer, but the researchers are currently developing 3D videophone capabilities to the system, mounting a camera system that can capture 3D images of the person inside TWISTER. All of it is really promising, but since the TWISTER measures 4 feet tall by 6.5 feet wide, maybe they should put their efforts on trying to reduce the size of the device first.