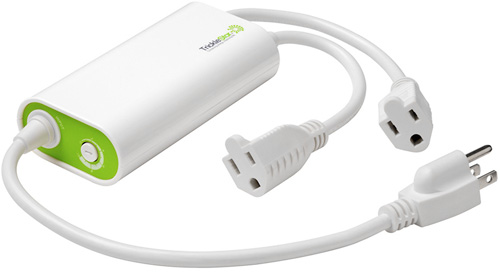 Making an attempt to be a little more eco-friendly isn’t always the easiest.  Especially if you’re not overly into it, you’re just willing to pop in those energy saving bulbs when you can and shut off appliances and lights when you’re not in the room.  While it’s great that you shut off the TV when it’s not in use, that still leaves the gaming consoles, DVD player, or streaming boxes up and running.  With those type things they usually have lights that stay on even when it’s on standby.  Well this handy gadget would help you to make sure all of that shuts down too. That being said, it definitely won’t shut down your outdoor TV antenna, as these would connected via a different cable.

Just shut off the TV and it will sense that the TV is shut off and shut off the electronics plugged into the device.  No extra effort is required on your part, which makes this an extremely nice gadget to have around.  Especially if you have a 360 you tend to forget to shut off.  This would shut it off and you’ll decrease the chances of getting the infamous RRoD.  It will cost you $34.95, but would in the long run save you money on your electrical bill.