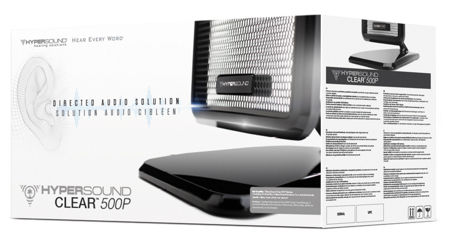 When we talk about Turtle Beach, most of the time we would think of headphones that are of the highest quality, be they be used for gaming or other purposes. Well, it looks like tinnitus sufferers have yet another device from which they can gain relief from, and it comes from none other than the folks over at Turtle Beach themselves. The latest FDA cleared tinnitus add-on feature for the HyperSound Clear 500P intends to provide relief for tinnitus sufferers all the while improving the home entertainment listening experience for those who have hearing loss.

Tinnitus is well known to be a serious and widespread hearing health problem, and is also referred to commonly as “ringing in the ears”. This is the perception of sound when no actual external noise is present, and right now, most types of Tinnitus have no cure. The Turtle Beach HyperSound Clear 500P directional audio system for the home is capable of offering relief for Tinnitus (ringing in the ears) apart from helping people hear the TV better.

Rather than existing methods of wearing headphones, earbuds or a hearing aid that delivers sounds to cancel-out the perceived “ringing in the ears”, it is also an uncomfortable solution — especially at night or when you want to grab some shuteye. This HyperSound Clear 500P arrives pre-programmed with nine soothing sounds, including steam, rain, wind, fan, shower, forest, waves, white and brown noises from which one can choose, and when it is pointed at a person with Tinnitus, it could relieve the “ringing in the ears” sound.